Tom And Jerry | Have a Picnic | Classic Cartoon Compilation |Tom

Tom and Jerry | tom and jerry cartoon | Catch Me If You Can! | WB

No results found
No playlists found
Most Viewed

Tom and jerry | have a picnic |

Tom & jerry | your most iconic

TOM AND JERRY, AN ICONIC CARTOON SERIES THAT WAS LAUNCHED DECADES AGO 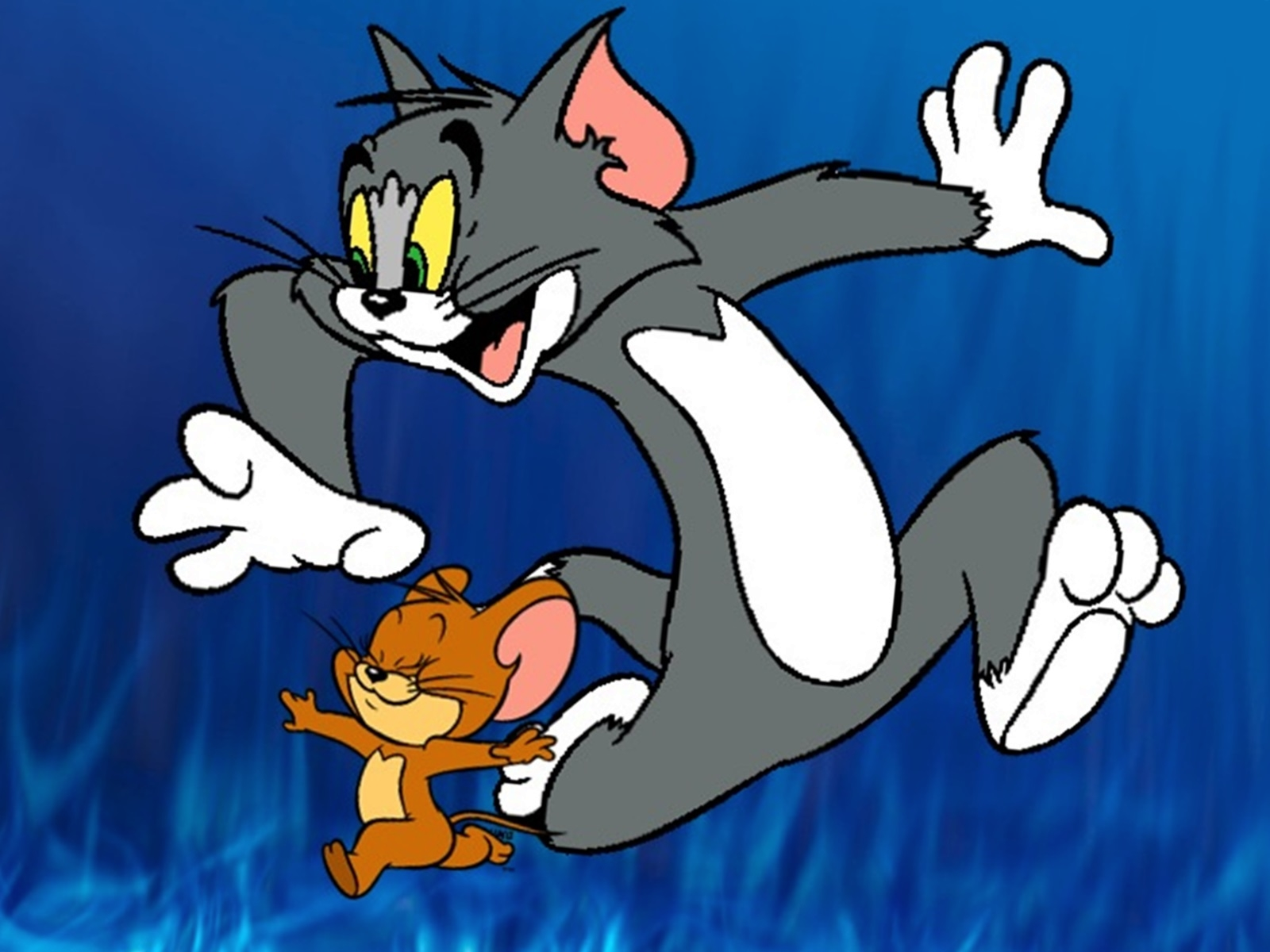 Tom and Jerry is a funny American television series that has been around for decades. It has been considered one of the best cartoon series of all time. It is a story of a jinxed cat; Tom, and his never-ending fight with a  mouse, Jerry.

Every episode comprises two short films about a cat and a naughty mouse.

The Tom and Jerry’s series is actually based on slapstick comedy, a type of comedy that exaggerates physical activity and goes beyond the normal limits of common comedy.

As a child, everyone watched the cartoon series and liked the rivalry between cat and dog. An angry cat devised a plan to catch the naughty mouse in his house. The mouse skipped the trap, and then there was never-ending chasing and quarreling between both of them. This cartoon series is still popular and liked by people a lot, fans wait for the new series of their favorite cartoon.

WHO IS TOM AND JERRY? 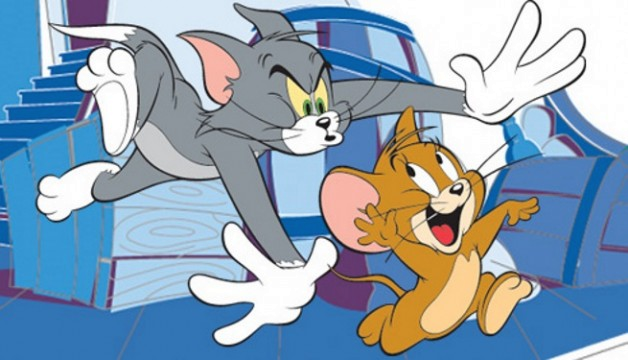 Tom is a grey cat; who is actually spoiled and loves to chase around a mouse named Jerry. Jerry is a small brown mouse who lives in the same place. Every episode encompasses their fights and never-ending pursuit. Most of the time, Jerry is victorious at the end. Even though both of them fight a lot, in the end, every time they settle their differences and act like friends. If any of them is having a tough time, the other one jumps immediately to help and refurbishes the danger.

WHO ARE SERIES’ SUPPORTING CHARACTERS? 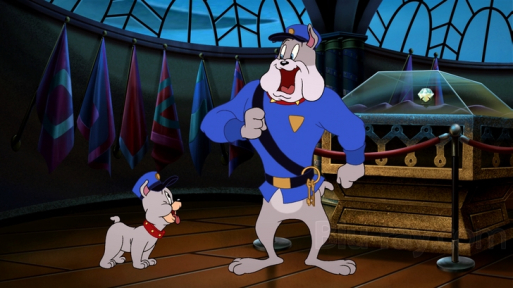 Tom and Jerry have some supporting characters in the series like Spike, Toodles Galore, Nibbles, Butch, and Tike. Spike is a violent and usually a dumb dog. Mostly his temper gets out of control; he takes care of his son Tike though. Tike is Spike's innocent, young and adorable son, Tom always gets chased by Spike. If anything happens to his son, Spike viciously blames Tom and starts to chase him.

Butch is a black cat who lives in Tom’s neighborhood. Both of them are mostly fighting on a beautiful lady cat named; Toodles Galore. Most of the time, Tom gets heartbroken when butch steals a spot with Toodles. Nibbles; is Jerry's young and innocent nephew. He does not know much about surrounding and feuds that gets him into danger. Nibbles; is also part of Mouseketeers along with his uncle jerry.

One thing that places Butch and Tom on the same page is that they both love to chase around Jerry.

WHO CREATED TOM AND JERRY INITIALLY?

The Tom and Jerry cartoon series was created by animators William Hanna and Joseph Barbera for Metro-Goldwyn-Mayer. MGM’s animation didn't produce any hit cartoon series before debuting in this genre in 1930. Animation series’ production was not much common at that time, Tom and Jerry made their debut in the short film Puss Gets the Boot (1940) and was a massive box office success.

WHO OWNS THE RIGHT TO TOM AND JERRY NOW?

Warner Bros owns the right to Tom and Jerry and developed a television series Tom and Jerry tales from 2006 and 2008. Apart from that, many movies featuring cartoon characters got released in the span of time.

THE EVOLUTION OF TOM AND JERRY SHOW OVER THE YEARS 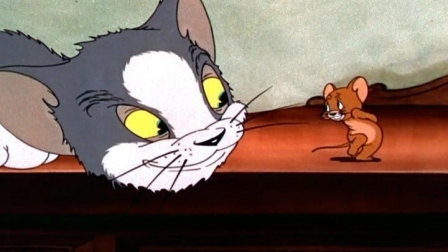 Yes, you guess it right, Tom and Jerry are that much old.

William Hanna and Joseph Barbera work at MGM cartoon studio. The studio was mostly involved in producing profit generated films. One day they come up with an idea, initially; they encounter a lot of restrictions. However, Hanna and Barbara did not give up their idea and Tom & Jerry made their debut in February 1940 in the short play Puss Gets the Boot. In that film, they were named Jasper and Jinx. The short series was a massive hit, but the names lack charisma. Hanna and Barbera announced $50 for employees who would come up with unique names. And in that way, Tom and Jerry were born. 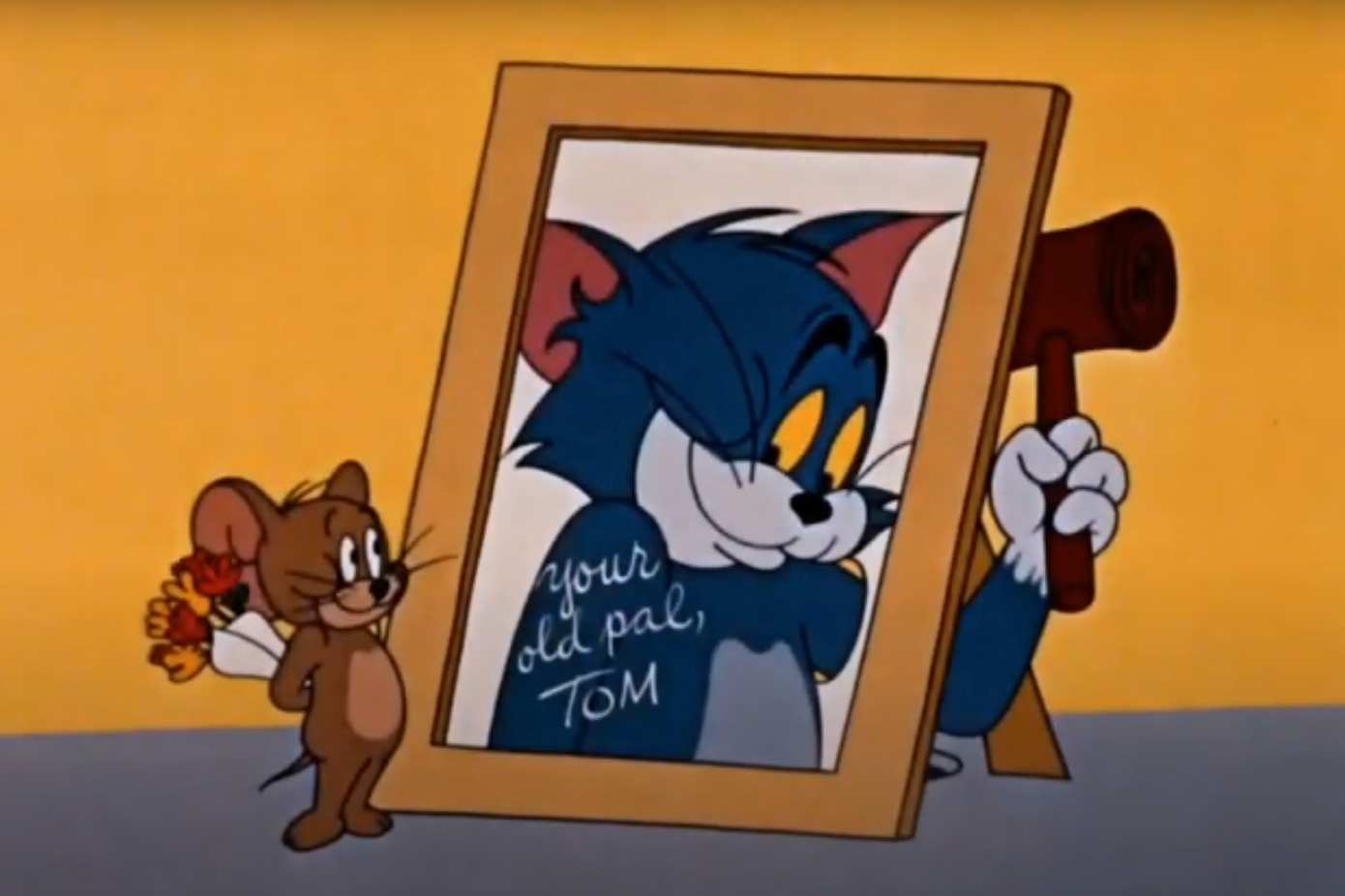 The franchise got functional again by MGM in 1961; they took the services of Rembrandt films to make 13 shorts. Gene Deitch was heading the project. These were different from original shorts in the way that they moved outside of the house to whaling ships, Nairobi jungle, Wild West and Ancient Greek, etc. They also changed Tom’s owner from Mammy’s two shoes, a middle-aged black woman to a Cobbler, bald, short-tempered, middle-aged white man. Although none of these films got nominated for the Academy Awards, they were a huge commercial success and became the highest grossed animated short series film of that time. 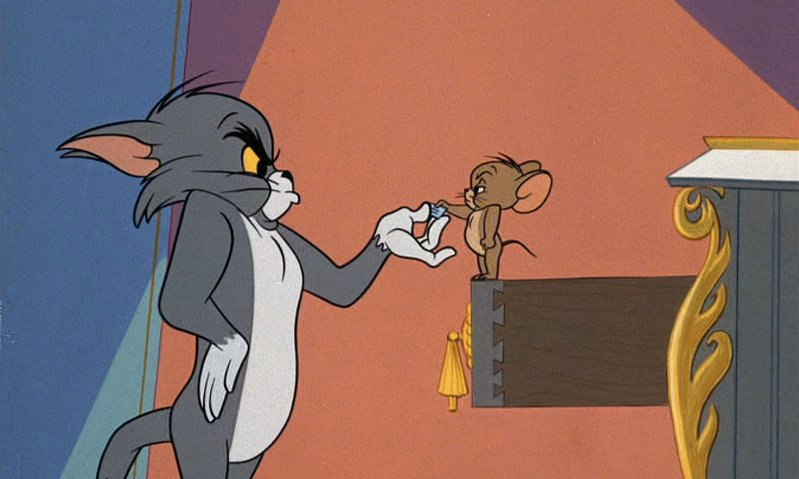 Chuck Jones who is known for Looney’s Tunes’ Wile E Coyote and Roadrunner, created 34 shorts of Tom & Jerry in his own style. His style reflected in his work from 1963 to 1967. Tom gets Wile E-style busy, knitted eyebrows gray fur, sharp ears, fuller cheeks, and long tail. While Jerry’s character was modified into bigger ears and adorable facial character. Jones also held the status of introducing the iconic theme tone that is used to this day and opening sequence in which hissing Tom is seen replacing MGM’s trademark lion. 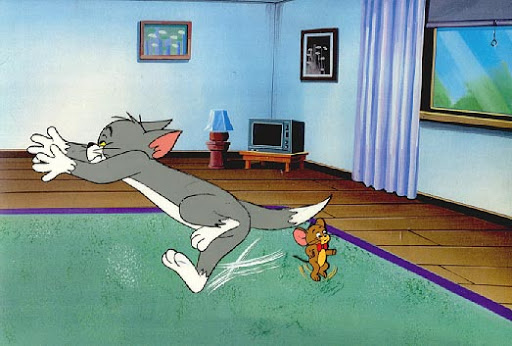 Tom & Jerry come back with their own TV series, The Tom and Jerry Show. The series has many distinct differences and comprises 48 seven-minute adventures. As there was violence in series before, now there were more restrictions against portraying violence in kids’ television. The reason violence toned down a little and characters become friends some time in the series. Jerry was given a cute accessory, a red bow tie. 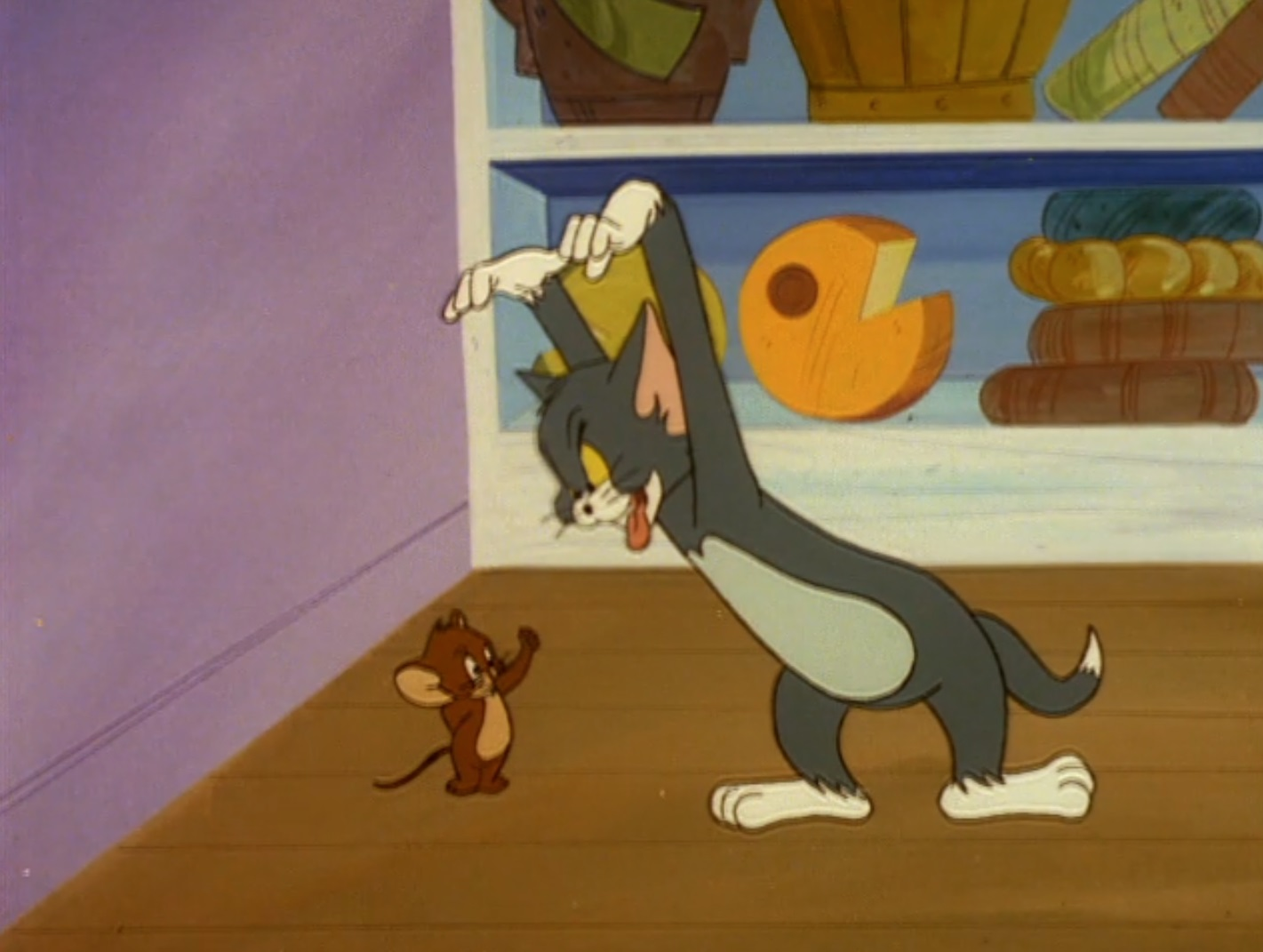 When production was taken over by Filmation studios, the characters returned with original avatars. The Tom and Jerry Show also features old characters from original series like Barney the Bear and Spike, Droopy, giving the audience more entertaining content. 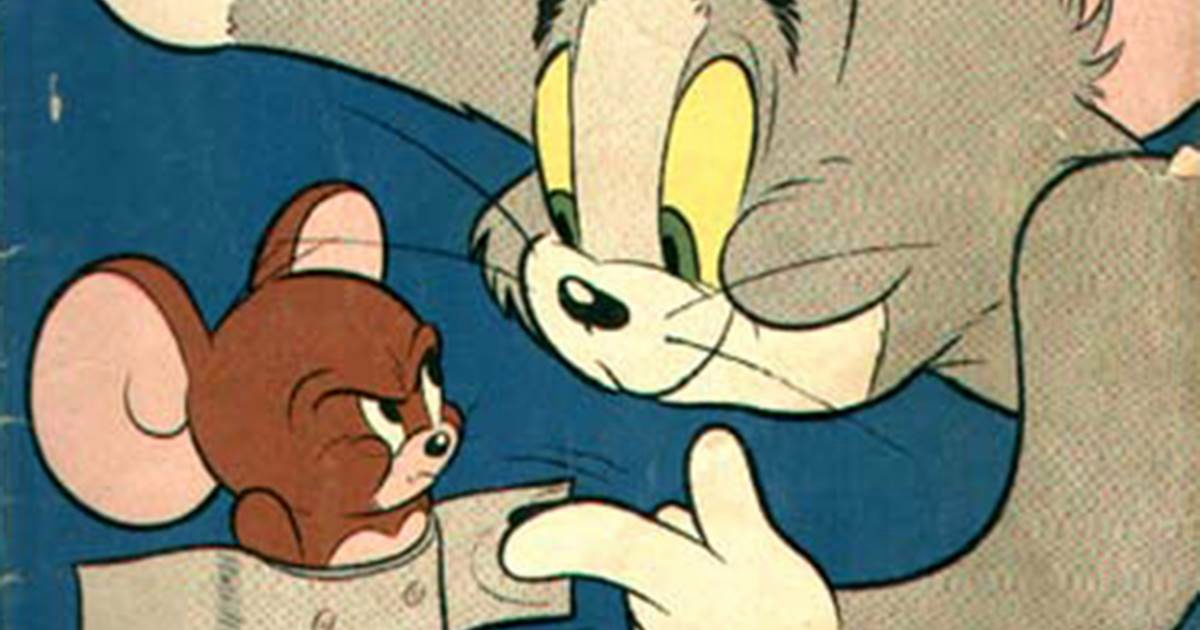 In the 1980 and 90s, there was a surge in the popularity of cartoon characters. Tom & Jerry also became popular among the masses and features a red bow-tie on Jerry and a red cap-wearing Tom. Spike and his son Tyke were seen talking and Droopy and his son Dripple in many episodes. 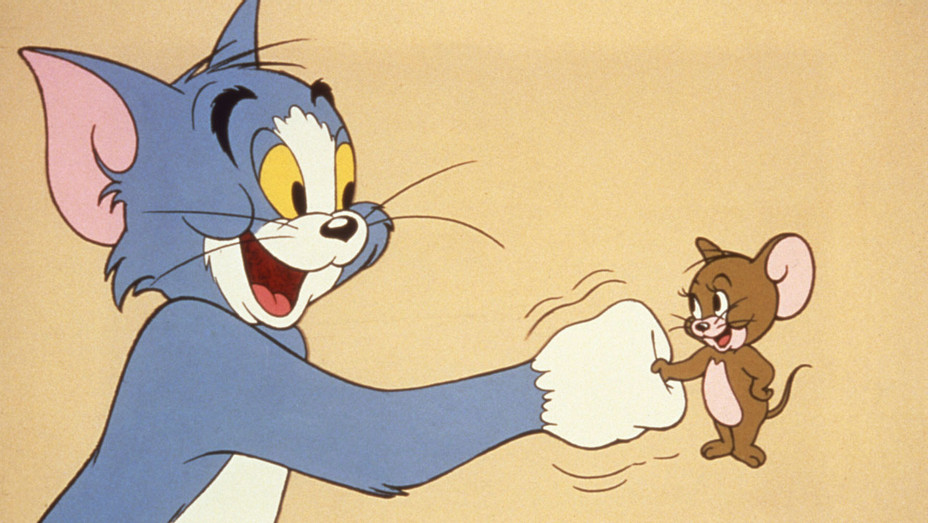 Warner Bros created Tom and Jerry’s stories, comprising a 13-part series of half-hour shows. Each part shows three adventures that were much more like fighting series, Tom and Jerry chasing around each other and always quarreling. 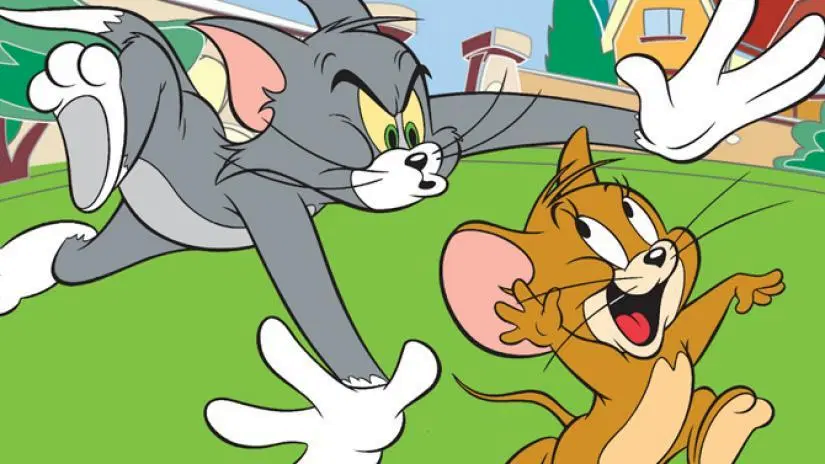 The Tom and Jerry series has been created under the name of Warner Bros since 2014 to this day.

Apart from occasional come back on Cartoon Network, there is not much happening with this legendary show. Tom and Jerry return back on Television in 2014. A second season was launched in 2015, before their 75th birthday. There was not much change in Tom and Jerry’s characters, but the animation used by Warner Bros gave the audience a more wonderful experience.

The series did not lose the essence of the original one, but digitalization has changed the character’s overview to some extent. The die-hard fans of Tom & Jerry still wait for the new series to come on Television.

Why are Tom and Jerry criticized at times?

Tom and Jerry are sometimes criticized for slapstick comedy and being too violent for kids. The reason why violence has been toned down in recent series. The portrayal of Tom’s owner Mammy's two shoes was also criticized and later on, she was replaced by an old white man.

Since 1975, Tom and Jerry have been chasing each other, and sometimes going on together to solve riddles. They never engaged in talk but in violence instantly. Rakes smashed into Tom’s head, or sometimes a metal rod stuck into him, but he always shook it off and kept in his chase. And sometimes, they become friends and set aside their differences.

This was not much liked by people as it was so incomprehensible to some viewers that the series started to lose its popularity. Rating dropped after that new Tom & Jerry show was launched after season two. Fans from both factions are there, who love slapstick animation in the Tom & Jerry show. But some were against violence and liked the most friendly approach between characters.

People still look forward to the slapstick way of comedy if the new Tom & Jerry series was created.

A seven-minute initial episode revolved around a  cat and mouse rivalry. That was called Mansion Cat, voiced by Barbera himself. This seven-minute episode comprises so much that Tom and Jerry grabbed seven Oscars awards, and every one of them was given because of its essence; slapstick comedy.

Tom is always losing his temper and running around Jerry, but Jerry keeps cool most of the time.

One episode that gives a deep lesson that we should think with intelligence and not let rage get hold of the mind. This was released on June 14, 1947, called Dr. Jekyll and Mr. Mouse, in which Tom changed the basement into a chemical lab and made the potion to make himself powerful and evil. But before he was drinking the potion, he held a draught and got beaten by him as Tom gave the potion to him.

The best episodes of all series were made for MGM  during the 1940 and 1950s. Fred Quimby wrote the signature episodes. Quimby was recognized by Simpsons as Mayor of Springfield and has a son named Freddie. It’s so good that Simpsons remembered Tom & Jerry's memory in its own series.

Tom and Jerry were celebrated more in itchy and scratchy, cartoon series watched by Bart and Lisa watched on TV in the Simpsons show.

It was worrisome for many people to watch such violence in children’s cartoon series. Itchy and Scratchy laughs at every instant and shows that no one has to worry about whether it is harmful to the children or not. Tom and Jerry is just a cartoon series for entertainment purposes. It doesn’t lead to violence but instead just a funny cartoon series.

In the 80 years of the series's creation, that cat and mouse have always managed to appear in kids' versions of 1992 musical movies where they sang and spoke.

Bill Hanna departed from this world in 2001, and Joe Barbera died in 2006 while leaving their legacy behind. Barbera said about his relationship with Hanna that both of them understood each other well and respected each other’s work and creativity.